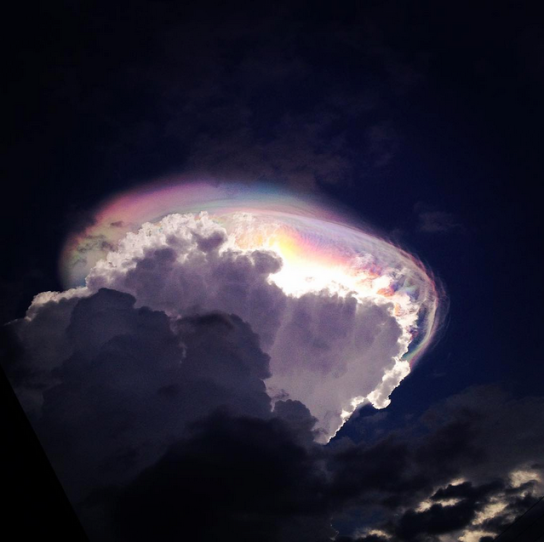 American Kabuki   –   Updated: Amazing Rainbow Clouds Appear over Cost Rica   –   9-19-15
http://americankabuki.blogspot.com/2015/09/amazing-rainbow-clouds-appear-over-cost.html
Images from Russia Today Article HERE.  I am not going to repost the article here and lend my energy to the speculation on the RT.COM article given its religious themes of “guilt”, retribution on impious evolutionists, and divine punishment themes (which is not happening!).  Guilt, judgement, punishment and redemption are tools of the controllers to instill a “less then mentality” inbodyments of Source, when they are in reality ALL Source beings of I AM.
I have an inquiry to the Sphere Alliance Data Collectors as to what these clouds are.  The pillars of light displayed a few weeks ago were holographic projections by the former controllers, using HAARP and satellite holographic projectors in attempt to stage a fake 2nd coming event.  HAARP and those satellites have been shut down, along with CERN.  The Sphere Alliance said that when the Spheres/City of Lights land, the beams of light they produce remain steady and do not shut down and move about.
So I am being a bit cautious as to speculating what these clouds are until I have more data.  I will post that here when it arrives.

[9/19/15, 1:15:22 PM] DEAR ONE/AK/TERRAN.  THE RAINBOW CLOUDS WHICH ARE APPEARING NOW DAILY ALL OVER THE EARTH ARE INDEED A RESULT OF THE MERGER/INNER GRATION OF THE FORMER SPHERES/DIMENSIONS/DENSITIES TO THE NEWEARTH.  WE SHALL FOR ALL INTENTS AND PURPOSES HEREIN REFER TO THESE FORMER SPHERES/DIMENSIONS/DENSITIES AS REALMS. AS SOME NAMES/LABELS ARE REQUIRED FOR KNOWING WHAT AND WHERE THE FORMERLY SEPARATED BEINGS/FORMS/NAMELESS AND FORMLESS ARE ARRIVING.

[9/19/15, 1:17:34 PM] THE PATTERNS SPECIFICALLY SEEN BY THE TWO WOMEN ARE VISUAL EVIDENCE OF DIRECT LANDING COORDINATES FOR A FORMERLY SEPARATED BEING FROM ANOTHER REALM TO RE-ENTER THE NEW EARTH. THESE ARE GOING TO APPEAR IN MASS NUMBERS AS MORE BEINGS FROM THE FORMER REALMS RETURN TO EARTH.  IN LOVEJOY. END.