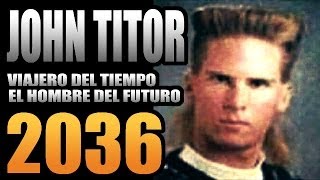 The story of John Titor is fascinating. No one is certain whether this mysterious character was a time traveler, was accessing the Akashic records, or participated in a very clever hoax.

First Appearance of the Time Traveler

The time traveler first showed up at an online group for time travel enthusiasts in November 2000, at first calling himself Timetravel_0, then later John Titor. For the next four months he would captivate and communicate with people via bulletin boards and chatrooms. He became such a controversial character that even three years after his disappearance he is still talked about today, and so are his grim predictions about our future, which, some believe, are beginning to come true.

Titor supposedly arrived in Florida in a 2036 model Corvette outfitted with a 500 pound military-grade time travel device that he photographed and posted online, complete with manual. He claimed his time machine – a “C204 time displacement” machine – was created by General Electric. He also claimed that the unit was powered by “two, top-spin, dual positive singularities that produce a standard, off-set Tipler sinusoid.” Titor posted detailed diagrams for the time machine’s specifications as well as photographs and details of its functions online.

Titor explained that at the time of his postings he was staying with his parents and his two-year old other self in Florida. He said that this was possible due to the existence of what he called multiple worldlines. According to this theory there exists an infinity of universes in which alternative realities become actualized to create new ‘worldlines’. Some worldlines are very similar, in these details may vary slightly depending how close they are but some worldlines are farther apart and will diverge dramatically. Apparently Titor’s time machine operates by navigating these alternate realities, though time travelers try to stay as close to possible to their original worldlines, which increases their chance of success.

Titor claimed that our worldline diverges from his own by only a small percentage. While Titor said he believed that we would experience many of the same things he has experienced in his own time, he did say that we have the power to alter our reality if we want to badly enough. But he seemed to have little faith in our ability to do this. He also explained that there is an infinite number of universes where all different choices are played out, it therefore wouldn’t harm anything if we did take steps to modify our future, and that is also why he felt he was causing no harm by revealing himself here. He even mentioned some small divergences he’d noticed, such as books not written and sports events won by other teams. He explained that this is a normal divergence of a few percent, and that some divergence is inevitable. Titor revealed that most of the time travel missions from his era aim between 1960 and 1980. He himself was now returning to his time after completing his own specific mission.

In 2036 John Titor is a military man. He had been sent back to 1975 in order to collect an IMB5100 computer. Titor’s mission appears to have been successful. Apparently he journeyed to Rochester, Minnesota in 1975 to visit his grandfather (who was instrumental in the design and programming of the 5100). Titor explains that the 5100 had some sort of inbuilt ability to translate computer languages that was unknown or unpublished before 2036. The computer was needed in his time to translate or fix other broken computer systems. This explanation seems quite valid when you consider that in our time NASA scours the internet looking for obsolete computer parts for their own uses. Titor dropped by in the year 2000 while he was waiting for his connection back to his own time. While he was there he also had a personal mission- to warn the US of impending civil conflicts and eventual global nuclear war.

The Future of Time Travel

In Titor’s world, time travel is used to get information or objects that would be helpful in getting his post-WWIII world back to a stable condition. Titor was forthcoming with details of his own life. He was born in 1998. In 2036 he lives in central Florida with his family and is currently stationed at an Army base in Tampa. He inhabits a world recovering from years of war and ecological destruction where our present society is viewed as “as being full of lazy, self-centered, civically ignorant sheep.” He had an early introduction to war when he joined a shotgun infantry unit at the age of thirteen, serving as a rebel for four years. During this time he worked with his father hauling cargo on ships traveling the eastern seaboard. Later at 31 he went to college and was recruited to time travel shortly after that.

Titor painted a vivid picture of his future where society is radically different from the one we know today. He told of how after the war, the United States split into five separate regions based on the amenities and military objectives they each had. The capitol of the U.S. was moved to Omaha, Nebraska. Despite the war, Russia eventually became the largest trading partner with the U.S. Titor’s America of 2036 had 5 presidents that are voted in and out on different term periods. The vice president is the president of the senate and which is voted separately. After the war, Titor says, early new communities gathered around the remaining universities (in his time called forts) because of their libraries. Titor himself went to school at Fort UF, which in 2036 is called the University of Florida. According to Titor, in 2036, most communities range in size from 1000 to 4000 people and each is run by a community leadership council. The council has the authority to decide if members from one community can move to another, based on whether they have the practical skills required by that particular community.

Back to the Future

In his present time, he spends time living with his parents in a community made up of “tree houses” on a large river in Florida. Periodically their river floods, giving them access to the Gulf of Mexico and so most of his neighbors make a living off the sea or in moving cargo by boat. In his spare time, Titor says he enjoys swimming, playing cards, reading, playing games on the net and talking with people who live in other
countries. Within his community, he joins in local celebrations, bonfires and dances. His favorite hobby is sorting through old magazines and videos of life before the war.

Oliver Williams, webmaster of johntitor.com discusses the fascinating time travel case of John Tiror from the year 2036. Williams pieced together Titor’s story from postings on Internet forums going back to November 2000 through March 2001. Using the names “Timetravel_0″ and later “John Titor,” the author of the posts claimed to be a time traveler from the year 2036. He provided details about his time machine, why he was here, as well as what the future was like. Williams said some people believe the things Titor described about the future are now coming to pass.

Titor predicted that the United States would start wavering in its support of Israel, giving their enemies in the region the confidence to attack. Titor also seemed to be in agreement with current scientific theory about how time travel actually works, Williams noted. One forecast that did not pan out, however, had to do with the 2004 Olympics, which Titor said would be postponed until 2040. Williams defended Titor by pointing out that because of the nature of time travel his timeline/universe was likely different than our own.

George played part of his pre-taped interview from 2/17/06 with Larry Haber, attorney for the family of John Titor, and Kay Titor, the alleged time traveler’s mother. Williams said some people think the John Titor time traveler story was invented by the Haber family for some as yet to be determined purpose. Williams remains open to all possibilities. “If it wasn’t a time traveler,” he said, “then it was a series of people that knew alot about what was going to happen.”

Coast to Coast AM with George Noory.
http://www.coasttocoastam.com/

Below is the download link that will provide you all six John Titor episodes of Coast to Coast AM which aired between 2004 — 2011, plus the Titor episode of another radio show called, “Shadows In The Dark” featuring Oliver Williams.