NASA:
“The sun is a star, a hot ball of glowing gases at the heart of our solar system. Its influence extends far beyond the orbits of distant Neptune and Pluto. Without the sun’s intense energy and heat, there would be no life on Earth…”

Those of us who have been following Zorra from Hollow Earth for almost four years now, have OFTEN heard him tell us that Helios, known as “our Sun” – is NOT a star… but is a hollow planet.  Zorra has explained that what Earth scientists have classified as “solar flares” is actually a hologram giving the illusion of solar flares and intense heat… to discourage unwanted visitors.We remember on one of our conference calls with Zorra, where he and Zaraya trade bodies, that Zaraya, upon his return to his surface body and the telephone, told us where he had found himself in Zorra’s body:  on Helios!  He told us that the temperature is a moderate 72-degrees. He met the 12th Dimensional Shining Ones, and said their faces were so bright you could not distinguish features.  He also told us he had embraced them, and their energy was very warm and loving.

Zorra has also told us that the heat that we attribute to the Sun is actually caused by the centrifugal force and friction of toxins in our atmosphere. Zorra asks, “If the Sun were hot; why is it cold in outer space??”

So… now, WHY is Helios removing his “mask?”  Zorra has told us, through Zaraya, that it is time for us to be aware of the true nature of our Sun.  It is a hollow planet, just as all of the other planets in our Solar System.  That is why recent photographs have shown spacecraft entering and exiting the Sun.

Once this “message” is complete and fully documented, the hologram will return and the Sun will appear as before.

All is well and all is safe. Nothing to fear.  This “Announcement” by Helios is just the beginning of our Galactic Education!

“Top and Bottom of Corona
Missing from the Sun Now“

The solar wind, from that large southern coronal h*** I’ve been keeping an eye on, has arrived and is hitting the Earth right now. Photo from SDO. Although the winds are now only 407.8 km/sec, they have already caused a whopping G7 geomagnetic storm in the northern latitudes. The auroras should be great. Elsewhere in the world, the current solar wind hit has caused unsettled magnetic field conditions. If the solar wind speed rises, then some or all of these areas should rise to the level of geomagnetic storm. Either way, reports coming in indicate that we are experiencing Time Shift activity. So watch for those Time Shift markers.

Here is something else to watch for: Directly Earth facing giant sunspot 2253. Why? Because as it’s positioned, it has the energy to fire off an X flare right in Earth’s direction. Yesterday 2253 fired off an M1 flare, which would have hit us except there was no coronal mass ejection [CME] involved. The M flare’s energy fell back to the sunspot.

Dear Ones,
Diaphanous red and green spheres around the sun, and red and blue cross on 3 January 2015. The beautiful instrumental music is “Prelude No. 2” by Chris Zabriskie, from http://www.freemusicarchive.org

In love, light and joy,
Alice

I have the copyright on this work (aside from any content I have attributed to others). Any person of good will can use any of the information herein that is mine, with attribution. –Alice B. Clagett © 2014

X-rays stream off the sun in this image showing observations from by NASA’s Nuclear Spectroscopic Telescope Array, or NuSTAR, overlaid on a picture taken by NASA’s Solar Dynamics Observatory (SDO). (NASA/JPL-Caltech/GSFC)

A NASA telescope designed to probe black holes and the vast expanses of the cosmos has set its sights on the burning heart of our own solar system, capturing the sun in all its high-energy x-ray glory.

The picture is the first image of the sun captured using NASA’s Nuclear Spectroscopic Telescope Array, or NuSTAR.
While the sun is far too bright for other NASA telescopes to gaze at without risking damage to their detectors, NuSTAR’s high end optics – designed to focus X-rays – were more than up to the task.

According to the agency, solar scientists had first considered using NuSTAR to study the sun around seven years ago, while it was still under construction. Fiona Harrison of the California Institute of Technology in Pasadena was initially skeptical of the idea.

“At first I thought the whole idea was crazy,” said Harrison. “Why would we have the most sensitive high energy X-ray telescope ever built, designed to peer deep into the universe, look at something in our own back yard?”

She soon warmed to the proposition, however, after David Smith, a solar physicist and member of the NuSTAR team at University of California, Santa Cruz, told her that faint X-ray flashes predicted by theorists could only be seen by NuSTAR. 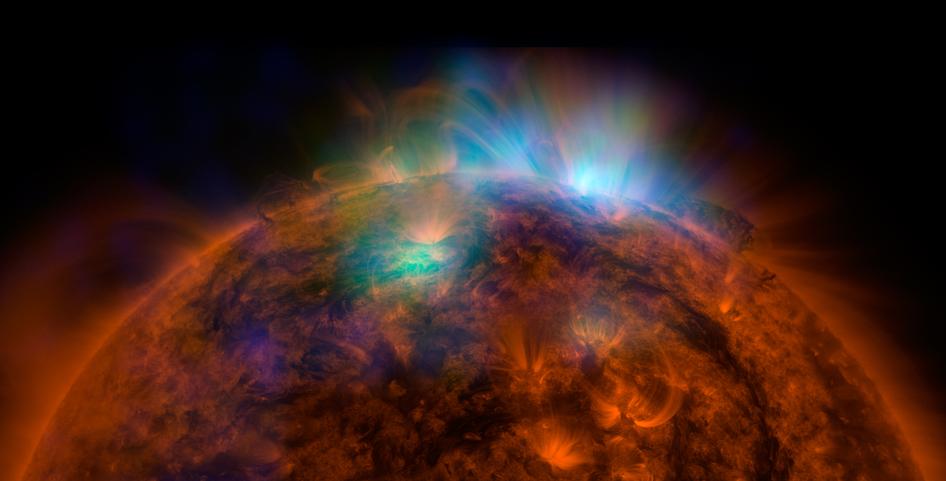 It contains 99.9 percent of all the matter in our solar system and sheds hot plasma at nearly a million miles an hour. The temperature at its core is a staggering 27 million degrees Fahrenheit. It convulses, it blazes, it sings. You know it as the sun. Scientists know it as one of the most amazing physics laboratories in the universe. Now, with the help of new spacecraft and Earth-based telescopes, scientists are seeing the sun as they never have before and even recreating what happens at its very center in labs here on Earth. Their work will help us understand aspects of the sun that have puzzled scientists for decades. But more critically, it may help us predict and track solar storms that have the power to zap our power grid, shut down telecommunications, and ground global air travel for days, weeks, or even longer. Such storms have happened before—but never in the modern era of satellite communication. “Secrets of the Sun” reveals a bright new dawn in our understanding of our nearest star—one that might help keep our planet from going dark