Spread the love (Stillness in the Storm Editor) Benjamin Fulford’s report from July 19th, 2021 has been updated. Click here to read the full report. This post serves as a notice that the original has been updated. Scroll down to where it says:

[Below is the remaining portion of Fulford’s update this week]

There is also something big happening in Japan.  We received reports from two separate Japanese right-wing sources that Ikeda Daisaku, the leader of the Sokka Gakkai Buddhist sect died on June 18th.

The U.S. military subsequently raided the Sokka Gakkai headquarters in Shinamachi Tokyo and left with two busloads full of arrested people.  SG is important because their 7 million or so members and their Komeito political party are essential for keeping the current slave regime of Prime Minister Suga Yoshihide in power.  SG workers have been essential to the election stealing process in Japan because they mass-produced fake ballots, according to Richard Koshimizu of the Japan Independence Party and other sources.

That is why only 22% of Japanese support the Olympics and why Olympic officials are met with boos and protests wherever they go.

“Our common target is safe and secure games for everybody; for the athletes, for all the delegations, and most importantly also for the Chinese people — Japanese people,” International Olympic Committee President Thomas Bach said. https://www.msn.com/en-us/sports/other/olympic-size-gaffe-in-tokyo-ioc-chief-bach-calls-japanese-people-e2-80-9cchinese-e2-80-9d/ar-AAM6AkL

The Japanese have also found out to their disgust that Olympic officials have their own sovereign passports and are above and beyond any laws.  They found this out in June when the Japanese Olympic Committee’s head of accounting Yasushi Moriya, 52, was murdered and they were forced to label his death a suicide. https://www.theweek.in/news/world/2021/06/07/japan-senior-tokyo-games-olympic-official-dies-after-jumping-in-front-of-train.html

Moriya was investigating the systematic use of bribes and embezzlement of Olympic funds.

It turns out the Olympic officials get a 20% cut of all money earned by the event.  They can also bribe or murder with impunity.  That is why, in a form of retaliation, the Japanese banned all ticket sales to Olympic events using the fake pandemic as an excuse.

What all this proves is that there is a group of people in Switzerland who can hand out special privileges to certain groups that make them “sovereign,” and thus immune to all laws.

This is also true of privately-owned groups like the World Economic Forum (headed by Klaus Schwab, a Rothschild), the WHO (run by one of their slaves), and the IMF.

“The World Economic Forum is working with the Biden administration to ensure that most people survive the coming food shortages.  Citizens that have up-to-date vaccination documents will receive regular packages of plant-based protein products.” 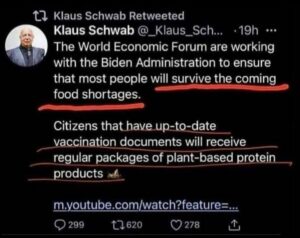 Here are signs of the food shortages Schwab and his fellow KM mafiosi are trying to engineer: https://gizmodo.com/the-u-s-wheat-crop-is-in-trouble-1847281693

Here meanwhile are threats made at the WEF cyber terror rehearsal earlier this month:

“A single data breach across the ocean could trigger a chain reaction and spark a ‘digital pandemic’ across the globe.  People, organizations, and entire states may fall victim to the catastrophe…Information and money remain the main target of cybercriminals.” https://cyberpolygon.com/upload/Cyber_Polygon_report_results_2020_EN_v1_1.pdf

Their latest crime appears to have been a failed Stuxnet attack on a Belarusian nuclear power plant. https://www.lrt.lt/en/news-in-english/19/1449365/belarus-disconnects-nuclear-plant-near-lithuania-after-safety-systems-activated

The NSA and MI6 are also reporting a nuclear explosion in Turkmenistan that is almost certainly linked to the KM.

These people are mass-murdering terrorist psychopaths and need to be removed ASAP.  From a military point of view, destroying the KM world headquarters as seen below, may be the only way to remove this parasitic filth from our planet.

Hopefully, this may not be necessary because there are signs all over the world their rule is collapsing anyway.

For example, the South Africans are waking up to their Mandela psyops disguised pseudo apartheid regime. https://www.rumormillnews.com/cgi-bin/forum.cgi?read=176715

“Following the events in the aftermath of former president Jacob Zuma’s arrest, his son Duduzane has appeared in a video in which he says: “the people that are protesting and looting, please do so carefully and please do so responsibly.” https://www.iol.co.za/news/politics/zumas-son-duduzane-appeals-to-looters-please-be-careful-while-looting-and-protesting-73a88e6d-826b-411c-a324-769c721d29f9

There are also protests in Canada, France, Germany, etc. https://www.msn.com/en-us/news/world/french-police-quell-protest-against-covid-health-passport-rules/ar-AAM9u8w

Poland, for its part, gives the finger to the KM’s EU by refusing to accept EU court rulings. https://notesfrompoland.com/2021/07/16/polish-government-not-planning-to-implement-eu-court-rulings/

There are also more signs of a regime change in Saudi Arabia, formerly a pillar of the KM petrodollar. https://www.leaders-mena.com/saudi-female-presents-hajj-conference/

You can be sure that much more turmoil can be seen worldwide over the summer as the revolution continues.

Finally, I would like to inform readers that I will be taking my annual sabbatical in the Canadian wilderness starting next week so, the next four reports have been pre-written.  We will issue emergency reports if something truly significant happens.

However, we recommend that our readers also rest and charge their batteries over the summer because we expect a very eventful autumn.