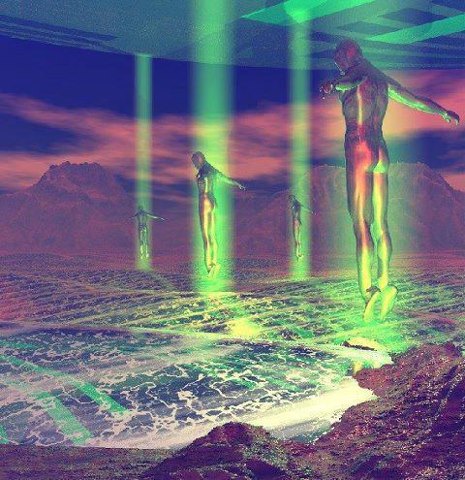 Well here we grow again!!  This growth phase is like the culmination of the many others we have had along the way.  We have been stretching, changing, expanding, growing our consciousness beyond what we ever thought was possible.  Granted we have been changing since the moment we popped open a weary eye to the Grand Illusion we were living, but since the transition from December 2012 into 2013, we made conscious choices to change in the area’s where we placed our focus.  By that, we mean, if something new was presented to you, you either stretched into it or retreated away from it.  For those stretching themselves beyond where they thought they could go… and how… so much more was given to you, added to your awareness and inner abilities.  New people and places came into your life.  Old ones left as the stage of your life experience changed.

At the same time, everything about life and earth and all that surrounds it, has been changing as well.  New dimension being created to house the enormity of You, of US together.  At the same time, older, denser dimensions collapsed into itself, releasing new energies for the ongoing new.

These last two days, since mothers day and the second hypnosis event opening into new dimensions, I dropped deep inside of myself… another metamorphosis underway.  Yesterday my whole inner body and mind felt like quantum soup.  Doing my regular mundane things became challenging, like thinking, walking with coherency.  My house looked like my house, but felt strange and unfamiliar at the same time.  I stood in the doorway of my backyard, just trying to orient myself with my world, and one by one, the hummingbirds that were to the left eating their endless buffet of sugar-water took flight to the north, zooming directly in front of me, as if to show me something.  As I was gazing mindlessly towards the north (my right) I suddenly could see the waves of interdimensional energy in the bushes.  This is not the first time it happened, its just the first time it was stable maybe.  The day I captured the orb fest near my computer, later that day I walked to my front door and felt this odd bumpiness and out the peripheral vision I could see sudden striations of energy to the right outside my door.  I was so disoriented I couldn’t hold it and it left my field of vision as quickly as it appeared.  Yesterday, it stayed there until I moved my body.

With my entire inner body feeling like liquid goo, I asked… what the hell is up with myself?  I hear “your changing.”  Dah!!  My response more sarcastic than anything was “it better be a good change.”  I hear back, “change is always for the better.”  I blew a raspberry and sat on the couch again.  I knew the voice speaking to me, Gaia.  This is the first time her voice came thru into my reality without being in meditation.  But then again, she was the one who showed up to teach me my new super powers… once again, much to my own inner shock.

I was given a very clear view of what we have embarked upon.  I pray I can share it outwards with you with as much clarity.  If we look at all the subdimensions of the earth realm, and again, there are so many they are “uncountable,” where every frequency, every timeline into the deepest past and further future reside, it would like similar to massive collective soap bubbles:

This image would represent ONE collective.  Many many interrelated earths, frequencies exchanging with each other.  Lets just call this collective Shambhala.  Inside the very middle would be the core of Shambhala, where the light of the humans is brightest and clearest.  The bubbles surrounding the core interlap, and as the humans there step into their fullness, that soap-bubble… that sub dimension collapses into the core.  What I have no way of showing you with pictures… is the hundreds of thousands of other collectives, that surround this collective and how they shake and change and collapse because one single sub dimension made a massive shift to fullness.  We see/experience these shifts as earthquakes, volcanoes, weather systems and such.  We experience these intense upwards beaming frequencies as biological issues such as headaches, flu or cold like symptoms, asthma (mine) like symptoms and such.

If all this wasn’t mind-boggling enough for my soupy self, I was brought right back to the image of the indian chief from my super powers meditation, phase 1, coupled with a very familiar phrase “return of the bird tribes.”  This headdress was created in the likeness of a race of extraterrestrial Beings that came and participated, shared their magic and wisdom with the inhabitants of earth.  The headdress was made of their feathers, Beings we now call angels.  They were bird like and humanoid like and could easily fly as they could walk and talk.  I can get so frustrated that I cannot draw a lick, because I seen them in their exactness yesterday. odd-looking, but very kewl.  Those who wore this powerful “headdress” were the ones that were clearest in their vibration, in their desire to assist their tribe, the earth and sun.  Like many star visitors that came before and after them, their time here on earth was finished and all that was left was vague memories.  Their feathers have long since became particles of dust within the earth… their memories distorted and reinvented.  However, their energy of beauty and skill and love is a part of our earth, a part of us that reached the vibrational frequency they imprinted many, many versions of earths ago.

I was also given a huge glimpse of how we are going to use our emerging super powers as well.  What we are capable of, is beyond incredible and how we will assist all versions of earth, mind boggling in our expertise!!  Small, tiny example of an experience I recently had.

One of my landlady’s cats started to look at my hummers like snack food, jumping 4 feet in the air to try to eat them as they ate from their feeders.  Putting myself back into alignment with love was challenging at best, with that cat, especially when I would hear the clang of the feeder hit the side of the house, I would go outside to see tiny hummer feathers stuck to the feeder…. grrrrrrrr.  I have got to find a way to love this damn cat as much as I love these hummers and at the same time, stop him from pouncing upwards at them.  Someone on my facebook gave me a link to a pest sonic control thingie… and I thought…. well hell, I can set an energy wedge with my intention for the same result, no cat jumping to feed on my beloved hummers, no harm coming to any of them and stuff.  So I did just that, created a huge wedge of energy beneath the feeders that would repel the cat and keep everyone safe from harm.  Its been a week now and zero cat leaping to eat the hummers.

May is going to continue with collapsing and reforming realties/frequencies/timelines so to speak.  Our physical bodies will continue to adjust according to our inner focus, our desires and thought processes and actions.

In my meditation with mother earth, she demanded (pesky lady) I put together one more super powers course before I leave on vacation the end of June, to include the personal one on one sessions.  Not a whole lot of time to play with in June, but I also have a very vivid idea of what we are doing and how, now.  I will not offer this again, cuz July, holy cow batman… we are taking it to a whole new, LIVE level of application.

Well, there is a ton more for me to share, but my day is about to begin.  Until tomorrow….

I love you all so much, thank you for consistently pushing me beyond my comfort zone and out of my own assumptions about anything!!!

P.S.S.  June Super Powers Course is now live to sign up if you dare (smile.)  www.mysoulcenter.com