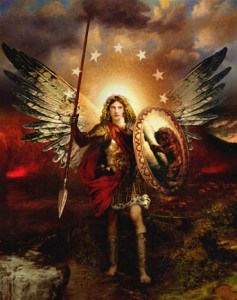 We continue with our composite interview, this time with Archangel Michael about Ascension.

Steve Beckow: What are some of the impacts of the human collective expressing its desire to ascend as one?

Archangel Michael: The human collective, the soul collective, wrested control. This is something that many, many lightworkers, light-bearers, love-holders, are shying away from.  …

Many are viewing this wresting of control into the phase of full partnership as something negative. We do not view it that way.

But what we are talking about, before we even discuss this issue of Ascension – which we are very eager to do, by the way – is we are asking you to adjust your thinking and feeling around this word of control. Because what you are saying is, “Well, heaven is still in control. The Mother, the Company of Heaven is still in control, and we are at their mercy.” And that is simply not the case.

S: In what way have we become your partners?

AAM:  You are not simply junior partners. Do you have the same overview, the same capacities as we do? No, but you are almost there. And the reason why we are sticking so close and making ourselves so available, from the ascended masters to your star brothers and sisters, to the archangels, to the Mother, is that you are doing this while in form. You are becoming your divinity — inter-dimensional, trans-dimensional, divine, whole selves — in form. And that is the truth of Ascension.

It is the reunification not only of you, but of all of us. Now, does it mean that you are completely reunified and back, that you have traveled all the way back to the source of One? No. But you will have those moments of ecstasy and bliss to remind you, to catapult you, to inspire you.

So, now we are in a different phase of partnership. You are no longer — think of it as a low level manager. You have been promoted and you are senior VPs — yes, all of you. And you are working on a very high level. And then you say to me, “Well, Michael, if I am working in concert with you and the ascended ones, and I am a senior VP, then I expect to be paid that way.” (2)

S: Now it’s almost as if a hiatus set in. How long will that apparent hiatus last?

AAM: The hiatus that has been created by the collective desire of humanity to go forward [together] in this undertaking of magnificence … is not indefinite. The plan of the Mother does not get put on hold, on pause, indefinitely. (3)

Now  we have spoken very recently about the many lightworkers who have been flying in and out of the Ascension portal, not only doing U-turns but the most popular movement at the moment is a very graceful figure 8, an infinity sign (∞). They are just doing it continually. It is quite interesting to watch.

And so since we have made that observation, that initial observation, more and more lightworkers have said, “Well, if that is possible I am going.” And that includes all of you who are listening.

S: Have many people gone through the Ascension portal so far?

These souls ― and yes, they are everyday people; they are not those who have been vying for sainthood, but they acknowledge their mastery, and part of each of you ascending is acknowledging your mastery ― but they have basically gone through the Ascension portal.

They are primarily way-showers. They have anchored in the higher dimensional energy ― Fifth, Sixth, Seventh, and so on.

They have what we have called made a U-turn and are still exhibiting on planet, in form, in everyday reality, because their promise ― as part of their sacred journey, and as part of the collective’s commitment, decision ― is that they would be the way-showers for the rest of humanity.

So they have, shall we say, Ascension Lite, insofar as that they have experienced the bliss, the higher realms. They have released the sense of restriction. They have embraced the sense of their inter-dimensionality, their ability to create and co-create.  (6)

S: What should the gatekeepers remember when they go through the car wash of “Ascension Lite”?

We continue to say both through this channel and through every single time we speak to you is that it is vitally important that during this time of change, of shift, of Ascension, that you are anchored firmly in the heart of Gaia. You cannot do this too often. It is keeping your feet firmly on the ground. …

So you are adjusting to that feeling. And one of the ways in which we would recommend to you … to do this and to practice with is to go into your heart, go into meditation as deep and as quietly and peacefully as you may, and I would suggest that if you call upon the blue flame or or course your triflame, that this will help anchor within it and then direct yourself from this place of connection and say now I am going to go and I am going to experience the fifth, the sixth, the seventh, the eighth, the ninth dimension, and then send yourself.

Feel as if your body, not simply your astral body, but your body, your experience, within the very room, the very chair in which you are sitting, has shifted into that reality. It is not that you are going on a trip somewhere or it is somewhere distant. That is not it at all. It is exactly where you are.

So go into that dimension and simply sit and experience the qualities and enjoy the beings you meet there. Decide how you like it and what you wish to take from that dimensional reality as well and to anchor it within your heart, your being and your body.

Then when you come back into your body, when you say OK, now I’m going to go back and I’m going to anchor into third dimension and reality, the sense is again like a reaching down not a pulling back. Come like a feather, floating on the wind gently, into that reality that you wish to occupy and then rest. The rest and reanchoring in Gaia and of course the expression always of thanksgiving and gratitude is mightily appreciated. (8)